After your last log-in to Google Analytics (GA) you may have noticed that you have access to a new sub-section of the content reports. Google has launched Content Experiments by integrating an A/B testing tool into GA. Google also announced that Google Website Optimizer (GWO) will be going dark sometime in August 2012 as a result. Therefore, the rollout began with users that have run an experiment in Google Website Optimizer (GWO is an A/B and multivariate testing tool) and is continuing gradually to all users. If you are not sure whether you have this new feature yet, browse to Content > Experiments. 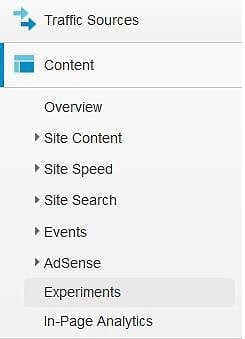 So is this a big deal? YES! If I’m not telling people they should always be segmenting then I’m saying you should always be testing. Content Experiments in GA allow you to run an experiment and improve your website performance right from where you do your analysis. Previously, you would identify a poor performing landing page in GA, for example, and then you would need to log-in to a testing tool like GWO to set up an experiment.

In addition to the unified analysis and testing that GA now provides; it’s also become easier to launch a test using a 4 step process that only requires you to have Google analytics coding on your site and a small extra control script on the A version in your test.

In my next post I’ll walk you through setting up an experiment, but for now you should know that you must have the control script on the A page as I mentioned above and a B version must also be live on your site for the experiment to launch. So you’ll also need a little help from your web team for the code and perhaps creative teams for the new landing page version. Start thinking of what you’d like to test and we will walk through how to tackle it.