A new reporting tool has recently surfaced in Google Analytics under the Audience reporting tab. The User Explorer reports take a big step closer towards analyzing traffic at the individual user level. This has been a long time requested feature in Google Analytics (GA) and at this point it has been released in a BETA version which you can find right under the Cohort Analysis report (also in the Audience section).

The idea behind the User Explorer report is that GA consumers are now able to drill down to a specific, yet still anonymous, individual visitor’s on-site behavior and analyze the (multiple) interactions they have with your site. This is beneficial for understanding the order in which those user interactions took place, down to the exact time and day! 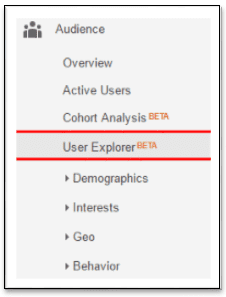 The report has two main tiers to it, the first will look similar to some of the other flat table standard reports available in GA. You have your primary dimension in the left-most column and the common metrics you’re used to seeing running across the other column headers in the table. The difference here is that instead of seeing an aggregate grouping for traffic coming in from a specific channel or goal conversions for a particular device type, we see a new dimension in our reports called the Client ID. The Client ID is a randomly assigned numeric value that GA uses to identify your browser/device. What this does is allow Google Analytics to deliver reporting tied back to a single visitor’s behavior with your site’s content, and then associate any returning visits back to the same Client ID.

If you were to click on any of the Client IDs listed in the row, it would drill down to a new style report that highlights many different attributes of that specific user. For example, clicking through we can see the user’s original acquisition date, the channel the user arrived from, the device category (desktop, tablet, or mobile) the user was browsing on when they arrived to your site and if you are pulling in any custom dimension these would be displayed for the individual user as well.

The fun doesn’t stop there, we get a roll up count of the total number of sessions the specific Client ID has had with your site, the total session duration (the combined length of time for that particular user’s sessions) and if you are running an Ecommerce site, the complete revenue amount you have collected from this Client ID.

As if this wasn’t enough information to make you throw on your dancing shoes, we also get a visual run down of the hit-by-hit interactions this user had with your site, in the order they occurred! This means we can see that a particular user viewed page A, page B, triggered an Event, viewed page C, and then generated an Ecommerce transaction with the time-stamp for each hit included in the report.

While this type of click stream data has been available in other reports for some time, never have we had it available at the user level basis. Currently the report can be filtered to show user interactions grouped into four hit level categories: Pages Viewed, Goals, Ecommerce Actions and Events Completed.

If you are pushing in a User ID from your third party systems prepare to take this report to a whole new level! Switch over to your User ID enabled view and you will see the User Explorer report changes the default primary dimension from Client ID to User ID automatically. Now, rather than hunting through multiple reports to show the channel the user arrived through, the number of goals they’ve completed or even the pages they viewed leading up to an Ecommerce transaction, this can all be found in a single report.

It will be exciting to see what changes are made while the User Explorer report is still in BETA and the different use-cases that come out of this style reporting. Being able to identify the key behavior points that define your strongest converting users has been a long awaited report. Below is the link to the official Google Analytics Features Release notes documenting the release of the User Explorer report (2nd to last bullet point):