Google announced a revision to Secure Search on Tuesday, October 18, 2011. The change went mostly unnoticed by casual Google Analytics users, but swept through the online marketing and analytics communities like wildfire. One week later, we would like to show an example of how the change is affecting Google Analytics reports.

But first, let us answer the question: “What changed?”

A user who is logged into Google, whether Google+, Gmail, or another Google property, conducts a search through the Google Search Engine for “pumpkin carving kit” and lands on a site selling the aforementioned item.

Prior to October 18, 2011, the owner of the landing page (assuming they have Google Analytics properly set-up), could pull the Organic Search Traffic report in Google Analytics (under Traffic Sources, Sources, Search, Organic) and see “pumpkin carving kit” amongst other search queries that delivered organic traffic. 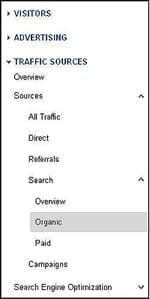 After October 18, 2011, the owner of the landing page could pull the same report, but now, the search query “pumpkin carving kit” would not be present. 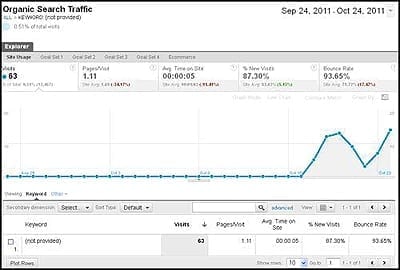 The above screen shot clearly shows that the change took affect on October 18, 2011 and that this web property sees “(not provided)” instead of specific search queries.

Where can I read more information?