Google has announced that they will be retiring Product Extension ads in late May 2013, which comes after Product Listing Ads were introduced to advertisers last year.

Google says that advertisers have seen better results from their paid model of Product Listing Ads and as a result, they will retire Product Extensions which will no longer be a separate ad extension in AdWords campaigns.

Product Extensions are additions to text ads on a search engine results page that include a small image and pricing of the product the user searched for.

Google recommends that advertisers implement Product Listing Ads in order to capture commerce-related searches and promote products on Google.com and within Google Shopping. In addition, Google has introduced new product feed specifications that merchants must comply with by July 2013.

With Enhanced Campaigns in Google AdWords, advertisers have the ability to automatically adjust bids based on device, location and time of day or week. When Google first released Enhanced Campaigns, advertisers were given the option to increase or decrease bids for mobile devices at the Campaign level.  The screen shot below shows this option with an automatic 30% decrease for mobile devices. 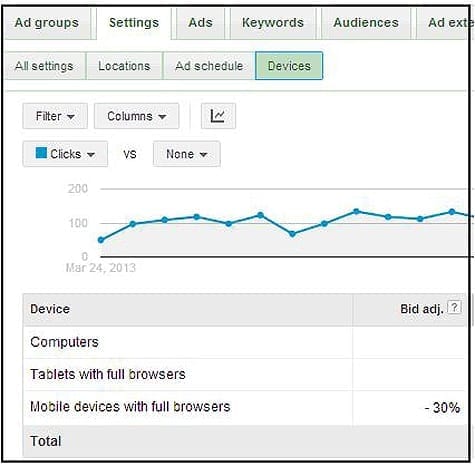 Now Google has announced that in order to provide more control and precision over bids within Enhanced Campaigns, advertisers will be able to automatically adjust bids for mobile devices at the ad group level. Google says that this functionality will be introduced in mid-May.

Ad group level bid adjustments will work well for large pay-per-click (PPC) campaigns with numerous ad groups since there most likely will be a wide range of average cost-per-click (CPC) values throughout a large campaign, especially if there are multiple keyword themes throughout the campaign.

Just a reminder that advertisers must upgrade to Enhanced Campaigns by July 22, 2013 or else Google will automatically migrate your campaigns to Enhanced by that date.

Earlier this month we announced a forced migration date of July 22, 2013 to Enhanced Campaigns, which means that advertisers must transition their legacy campaigns to Enhanced or else risk the chance of losing device, location or ad scheduling targeting without migrating on their own. Google AdWords has announced its Upgrade Center to make upgrading easier for advertisers with many campaigns. The new Upgrade Center will be rolled out to all Google AdWords accounts over the next few weeks.

Google says that with the upgrade center, advertisers can upgrade several campaigns at a time as well as merge campaigns together in a few easy steps. This new Upgrade Center will be available in the left-hand navigation tab within the Campaigns tab, where the Shared Library is located.

The bulk upgrade option gives advertisers a way to upgrade multiple campaigns that don’t require merging campaigns. This is a great option for easily upgrading a campaign to Enhanced and only adjusting bids for mobile devices.

On the other hand, if you have campaigns that have similar keywords and geo-targeting, the Upgrade Center will automatically identify these campaigns to be merged together. Next, advertisers will be able to preview and assess the recommended campaign settings, ad groups and even ad extensions for the new merged campaign. Google will automatically combine ad groups and budgets. In addition, Google says that other campaign level settings and extensions in the Primary campaign will be used over the Secondary campaign that was merged.