For those keeping up with the “Google +1 Button” hype, you may have realized by now that you can access its associated data via Google Webmaster Tools:

From your dashboard, click to expand the “+1 Metrics” section; this will reveal sections on Search Impact, Activity and Audience. In this section, you will see:

The Activity report: Allows webmasters to view how many times a page has been “+1’d” from a specific page or from search results.

The Audience report: Displays demographic data for the +1’s such as age location and gender.

As with much of the specific numbers in all of the metrics in Webmaster Tools, much of it is an “average” or an “aggregate” number. For instance, the data you are able to view in the categories above is only displayed if a certain number of people have clicked on your +1 button.

Learn all about it from a recent Google Webmaster Central Blog post:
http://googlewebmastercentral.blogspot.com/2011/06/1-reporting-in-google-webmaster-tools.html.

On September 15, 2011, Google announced a new way to handle “pagination” issues for articles and product pages which “spreads” content throughout several pages. A fundamental issue that many webmasters have with any series of pages that contain related and highly similar data is how to alert the search engines to their preferred indexing priorities.

With the new rel=”next” and rel=”prev” link tag elements, webmasters are now able to indicate to the search engines that an interrelated series of products or articles should be indexed and assigned link value as a series: 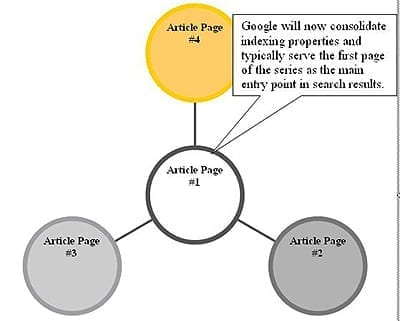 Much like the rel=”canonical” link, which lets you alert the spiders to the “preferred” version of a page, this recent innovation is more of a suggestion than a directive and Google will take the rel=”prev” and rel=”next” directives into account, in addition to other factors, when determining a page’s relevance.

SEO implementation has many facets. From optimizing some pages on your current website to building a brand new website from the ground up with SEO in mind; but what about a complete overhaul of your current site? Would it even be possible because of the constraints of the old CMS or platform your website is built on?

Once you’ve made the decision to get that new version of the site up and running, here are a few SEO implementation strategies to contemplate:

Plan the structure of the new site; Is it logically organized so search engines and site visitors can get to all of the important pages in a couple of clicks?

The above considerations are extremely important for your optimized website redesign, but I think there are 3 other considerations that, above all, have the most impact; keeping the domain name the same (to preserve trust rankings with the search engines and to mitigate the need for redirects), ensuring the new site design is friendly for both the users and the search engines (is the site’s new interface something you and your users like; maybe utilize a third party usability study?) and properly redirecting the search engines and users to any new page names. All of this will ensure a smooth changeover from the older version of the site to the new one.