Google Buzz Over Before it Began?

Google Buzz was introduced to the world just a few short weeks ago as a new Social Media tool that allows for sharing of status updates, images, and videos via a new Gmail tab called Google Buzz. However in that short time, it has garnered plenty of attention and publicity. Unfortunately for Google, most of it hasn’t been the good kind. The search giant is being slammed by many outlets for Buzz’s lack of privacy, by sharing personal information without a user’s consent. Basically Google was ‘making’ you socially connected with people that you share email information with, which for all of us is a pretty scary concept.

Stories flew around about people getting caught cheating and women being reconnected with abusive ex-husbands. Very quickly, Buzz was tarnished. Google quickly scrambled to adjust their privacy settings in order to placate their users. These new options give users more control over the information you want shared.

But it’s far from over… Not a week later, Google is involved in a local class action complaint, where a Florida resident claims they have broken several electronic communications laws. It’s only a matter of time until we hear about more of these types of cases.

It’s concerning to watch such a giant corporation go through the deployment of a new product with so many bumps in a short span of time. It will be very interesting to see how Google responds and reacts to all the ‘buzz’ on Google Buzz.

For many years now, advertisements during the Super Bowl have been almost as popular as the game itself. People have come to expect new and entertaining messages from big brands like Pepsi, Coca-Cola, and many automakers. So come Sunday, it will be interesting to see how many of these brands decide to incorporate Social Media into their campaigns.

For the first time in over a decade, Pepsi has decided not to run any ads during the game. Instead, they are choosing to put an estimated $20 million toward an online campaign that includes updating their website, as well as creating a strong presence on Facebook.

Coca-Cola apparently will be doing a little bit of both. They plan to run 2 advertisements that will promote their corporate philanthropy and also offer virtual gifts through their Facebook page, with all donations going to one of their charities.

Going even a step further is the automaker, Audi. In an effort to promote their environmental-friendly cars, they have created the “Green Police,” a group of individuals from the media that are chronicling their driving experience on their journey to the Super Bowl in Miami. Their updates will be found on YouTube and Twitter. A Super Bowl commercial will also introduce the world to this new campaign.

These are just a few examples of how integral Social Media has become in our overall marketing campaigns. Just a year ago, none of these types of media were being discussed in this magnitude. If the Super Bowl ads are any indication, 2010 is going to be a very social year!

Less than a month after Yahoo pulled the plug on their popular Paid Inclusion program. The company has decided to outsource its shopping engine to PriceGrabber. This decision to exit the shopping engines won’t come as too much of a shock to those in the industry given Yahoo’s future plans with search advertising. However, it is surprising that they decided to give this business to PriceGrabber over Microsoft’s platform, Bing Shopping.

Perhaps Yahoo believes that by giving Microsoft their shopping business, they will eventually become too dependent on them. Either way, it should be interesting to see how this will play out for all parties involved.

Most importantly is how this will affect the advertisers. My suggestion would be to stay ahead of the game and open an account with PriceGrabber directly. Be ready to capture the major shift in traffic as the largest shopping engine outsources all their traffic to a direct a comparison shopping site. By advertising through these types of engines you have the ability to reach a more qualified audience. 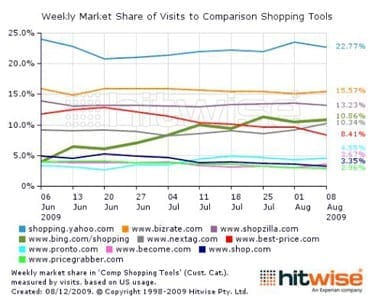