As the presidential inauguration approaches and the economy starts to rebuild itself, most people I know are reading top news stories on a daily basis. It comes as no surprise that in recent studies, it appears news readers are dropping print media and relying more on digital forms of gathering news.  The Internet has now surpassed all media except television as a news source, according to consumers surveyed in December 2008 by the Pew Research Center for the People and the Press.  Last month, 40% of survey respondents said they rely on the Internet as their main news source, which is up 16% from 2007. 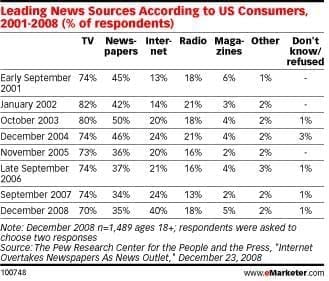 As you can see from the chart above, television is still the main source for national and international news.  If the rest of the world is anything like me, I expect the Internet to surpass television in the near future as the leading news source.  When you compare the delivery of the two, television sources feed you the news that they want you to hear.  Internet allows you the choice of reading the headlines and viewpoints that are most important to you.

So how does this relate to you and your internet marketing campaigns?  Don’t forget to include contextual advertising in your 2009 online marketing plan.  Whether you plan to incorporate text, images, or video- online news sources are a excellent avenues to reach your audience. The Google content network is a great place to test some of these ad types on select news sites such as NY Times, Washington Journal, US News, Forbes, etc. If you would like to learn more about Google’s content network, please read Sonya Wood’s most recent blog post.