I continue to be amazed at Google’s ability to wrap their services into the routines of our daily life, and to think it all started with a simple text box.  In the small but growing universe of mobile advertising, we continue to see Google grabbing market share.  I believe a driving force in the search engine’s continued growth in mobile is its Android operating system’s tight integration with Google’s services.  In the second quarter of this year Android ran 17.2% of smartphones, a jump from 1.8% a year earlier.  This puts Android on track to overtake Research in Motion’s BlackBerry operating system for the number two spot by the end of the year.  The following graph describing the smartphone operating system market share really says it all. 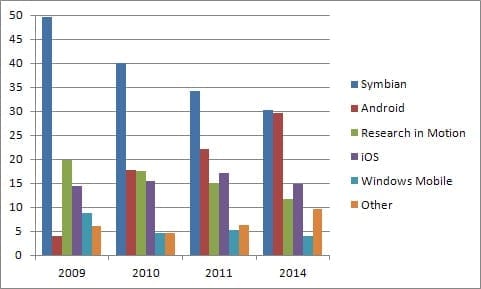 The projections for mobile advertising spending continue to show impressive growth, as people transition from PCs to smartphones for their computing and communication needs.

These number have not gone unnoticed.  In order to increase the volume of mobile search traffic on Bing, in 2009 MicroSoft entered into an agreement with Verizon to make Bing the default search engine on their network.  Verizon retained the right to use Google’s search engine on phones powered by Google’s Android operating system.  So via Google’s smartphone operating system’s dominance over MicroSoft, they also are leading in search volume, since the Android smartphones are Verizon’s hottest sellers.  The reason for MicroSoft’s weakness can be attributed to their lack of an operating system powering a smart phone, and therefore none of MircoSoft’s services being bundled with the smartphone; completely opposite of the desktop’s proliferation of MicroSoft’s browser and other productivity tools bundled with their Windows operating system.

Will Nokia and it’s Symbian operating system make a stand and fight back?  It appears that they are trying to via some housecleaning at the c-level.  In the recent news out of Finland, a huge shake up in their leadership is underway.  Their smartphone chief quitting, CEO Olli-Pekka being replaced by MicroSoft’s Stephen Elop and chairman Jorma Ollil planning to step down in 2012, all revealed while Nokia launched three new smartphones based on a new Symbian operating system at their annual Nokia World event.

The evolution of our computing and telephony systems continues to be a topic worthy of monitoring, in order to stay on top of the marketing trends and opportunities spawned from this growth.  We will continue to observe and provide our guidance in this ever changing landscape, so continue to visit our blogs for the latest in all things related to Internet Marketing.