While Google still reigns as the king of search, this does not discourage new search engines from trying to take over the kingdom.   The newest challenger to the throne is the recently launched Cuil(http://www.cuil.com/).   Cuil claims to index three times more pages than Google, and ten times more than Microsoft.   Cuil hopes to deliver better results based on page content, not popularity (or, links).

The much hyped search engine was launched on Monday, July 28 2008.   In surface comparison, it has a much different look and feel compared to the traditional search engines.   Instead of listing results in a top ten list fashion, Cuil uses two or three columns, based on the user’s preferences, to display results.   While it can be inferred that the number one position would be the listing in the top left corner, it is not clear as to what the other positions mean.   Because of this format, Cuil is able to display longer descriptions and images associated with the listings.   One of the issues we are already seeing is that the image being displayed with the listings often does not appear on the site or is even irrelevant to the key phrase.   An interesting example can be seen below: 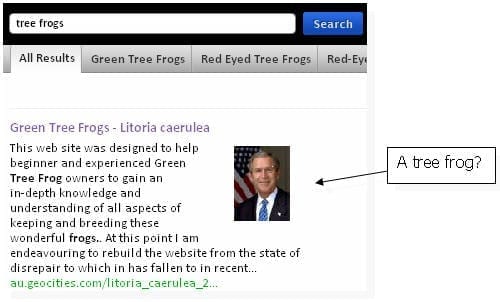 Another issue that caught our attention was the fact that the site suffered downtime as a result of the number of inquiries it had to handle on its launch date.   Cuil received so many visitors on Monday that their servers crashed around 3:00 PM EST.   For an Internet search engine, .this is not the best result, but it does demonstrate the amount of interest in their offering (at the moment, they claim that users can search 121,617,892,992 web pages).

Initially Cuil doesn’t seem to be the either “The World’s Biggest Search Engine” (as claimed on their site) or even a so-called “Google Killer”.   Regardless of what Cuil intends to be, it’s important to keep in mind that it is only in its infancy.   Cuilwill be something to monitor over time to see what transpires.   At this stage, the makers are still working out the bugs and trying to produce a relevant and useful search experience.