With the launch of Google Instant last week, Google took its “suggested search” feature to a whole new level with search results flickering and populating as the user types. As each letter is entered into the search query box, the results shift and change until the user lands on just the right information; either through completing the original thought or becoming interested in something different that’s flashing across the screen or being suggested by the query box suggestions.

This new interactive search interface has prompted a variety of questions about keyword strategies. Do these “interruptions” in lengthier queries mean that sites should optimize for “shorter tail” words”? Will Google Instant be such a “distraction” that it will change or sidetrack a user’s original intent? Should keyword researchers change their methodologies and approaches to keyword selection in response to Google Instant? Some folks speculating about the “impact” of Instant have gone so far as to say that sites may now want to optimize for single letters in order to capture attention and interest at the moment that users begin typing.

Focusing too heavily on the “short tail” and dramatically altering keyword targeting strategies is likely ill advised, however. First, let’s address the most outlandish musings. It’s important to realize that the results displayed in Google Instant are being displayed for the predicted query, not for the limited string of letters the user is typing. That means that if you start a search in Google with the letter “a” the results that populate are not pages targeting “a” but rather those targeting “aol” as that’s the top keyword that Google is “predicting” intent for, as shown here: 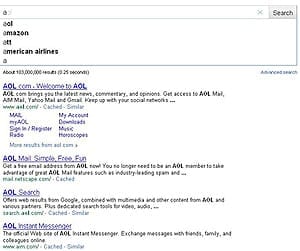 Only if you hit “enter” after typing “a” will you see the results for that single letter query. Second, Google Instant does not eliminate the basic principles that apply to quality in keyword selection. Ranking for a non-qualified, high-volume keyword (or letter in this case) could generate traffic, but traffic doesn’t equal conversions. Ultimately, just because the search landscape has changed in Google, doesn’t mean we have to jump to nonsense tactics to “improve” SEO.

That said, there is something to the theories and speculation that Google Instant could change users’ intentions or the trajectory of their search behaviors. Ideally, Instant should expand the depth of a user’s search quality and help users refine their searches and utilize more multi-dimensional, multi-step queries to gain greater details on their target. However, there are a few things that could go “wrong”. One, some people, could get distracted and totally veer off course. This could occur with some people, but it’s not much different than those who did so just as a result of Google “search suggest” features, which have been around for a while. More likely, though, are those who would have used a truly “long tail” search but now “settle” for something in the “mid-tail” because the instant-populating results draw their attention before they are able to complete their “longer” thought. This is where it may make sense to revisit keyword targeting (and matching to specific and best-fitting landing pages) on your site. If you rank for keywords in this mid-range you will, in Google Instant’s updating results, be able to capture attention, and possibly clicks, sooner. Any Google-Instant-inspired changes in behavior, however, aren’t going to be evident right away. It will take some time to spot trends and sort out the keyword targeting impact, based on analysis of changes in actual traffic patterns and keyword usage by those visitors. This is something to watch for over the coming weeks, and adjust strategies accordingly.