Clubhouse – Have You Joined the Party?

Clubhouse hit the Social Media scene earlier this year and is starting to gain some traction – with users, activity, and funding.  It is only available for iPhone users now, downloaded as an app, as there is no version for Android offered yet. Currently it is considered in testing mode (beta), as you must be invited by a current Clubhouse user to “join the party”.  That is what this reminds me of a bit, the 80’s version of Party Lines (so dating myself here – but you know they were awesome in that teenage moment, if you were there!). The experience is all Audio – so definitely gives those experiencing Zoom-fatigue a break from being on camera. A true conversation or exclusive invite to a podcast. dialogue.

Once you join Clubhouse, you can enter different “rooms” to listen (and participate) in a variety of conversations. There is a room for anything you can think of,  being led by people from all backgrounds and geographies (the app was recently blocked in China). Of course, users can also start a room too. The size of rooms can range from intimate to thousands of people.

Clubhouse will suggest different topics and rooms based on your interests or who you “follow”. The below image is an example from the app for suggested upcoming events. 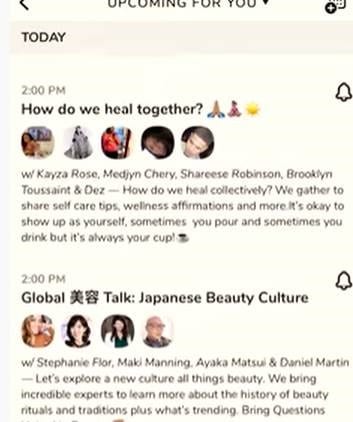 If you click into any of the suggested rooms, more details including the speakers will appear as shown below, plus the options to share in our out of the app, tweet and add to your calendar are offered. 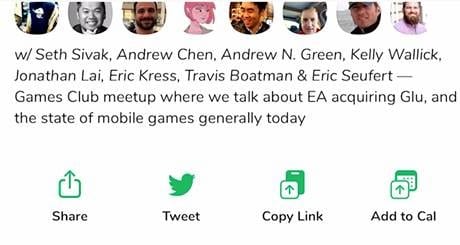 It’s very easy to pop in and out of rooms, connect with other like-minded folks in the same room, or identify new rooms based on Clubhouse’s suggestions. The overall vibe seems informal and tends to feel a bit party-like, although there are certainly many entrepreneurs, tech leaders and business aficionados joining in or leading rooms.

Both Facebook and Twitter have strongly hinted at developing similar or competing products within their platforms, likely given the immediate popularity once Clubhouse hit the market. However, do individuals have the bandwidth to tackle another social media platform? This one is a bit easier in that if you are a speaker in a room for live conversation the dialogue can run in the background while multitasking, but that still requires time. Which for many of us, is a scarce and precious commodity.