Facebook Has a New Text Overlay Tool for Advertisers

Digital marketers who advertise on Facebook are familiar with these platforms being very particular on the amount of text that are in advertisements. To ensure a great user experience, Facebook instituted a rule that said only 20% of your ad can be text-based. Any ads that has a text overlay greater than 20% would be disapproved by the network for advertising. This created a challenge for marketers and design teams – constantly asking the question internally, “Is the text on this image greater than 20%,” or “How do I create the best call to action ensuring my text doesn’t exceed 20% of the image?”

Well, Facebook heard your concerns and recently released a new Text Overlay Tool for Advertisers. Instead of designing your ad, uploading it to Facebook and hoping it gets approved – now you can take your ads and upload them to the Text Overlay Tool which will immediately gives you 4 rankings for your ad – OK, Low, Medium, and High. Here is what each of these rankings mean:

OK – This is the best ranking you can receive – it means the text on your ad did not cover more than 20% of your image according to Facebook and your ad’s reach will not be affected.

Low – A ranking of Low from the Text Overlay Tool implies that your ad was close to being under 20% text, but maybe it went slightly over. In the past this ad would have been disapproved and not run at all. Now, Facebook will allow an ad with a “Low” ranking to run, however your reach will not be as high as an ad with a ranking of “OK.”

Medium – If you get a ranking of medium then your ad had too much text and your reach will be affected much more.

High – This ranking indicated you had a lot of text within your advertisement. Facebook may not even run your ad if you have a High ranking. 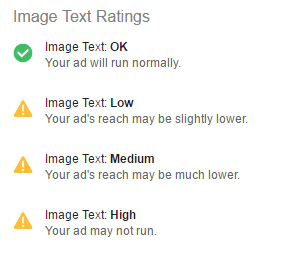 While this new tool is great for advertisers to know right away how much text is on their creative – it can also work against you if you do not correct the ads. The old Facebook policies were black and white – if your ad is over 20% text it will not run at all. Now, there is a grey area where your ad will run with a ranking lower than “OK” but your reach will be affected. Just because Facebook will now allow these ads to run, does not mean it is a best practice for the advertiser. Effecting reach can ultimately affect your impressions, engagement and ROI.

As an advertiser you should continue to follow the same guidelines, creating ads with minimal text for a better visual user experience. Remember, logos, numbers and watermarks still count as text in your ads. Check out the Text Overlay Tool here.

In order to get the most out of each campaign, use the Text Overlay Tool to ensure every ad you upload has an “OK” ranking and will reach your target audience most effectively.