Is Social Media Putting an End to Super Bowl Advertising?

Since I can remember, Super Bowl Sundays were more then just a football game, as many viewers tuned in primarily for the commercials. With the ever-changing trends and the large shift toward online marketing and social media networking, businesses are starting to invest their advertising dollars in other mediums outside of television.

When this past Sunday’s Super Bowl commercials aired, many familiar brands had returned, but for the first time in over 20 years, Pepsi has opted to take a different approach. The world renowned company has readjusted their advertising dollars from television to social media. Pepsi Co. decided not to spend $2.8 million on a 30-second spot. Instead, the company created the Pepsi Refresh Project community on both Facebook and their website, which will donate hundreds of thousands of dollars to organizations, individuals and companies with great ideas. 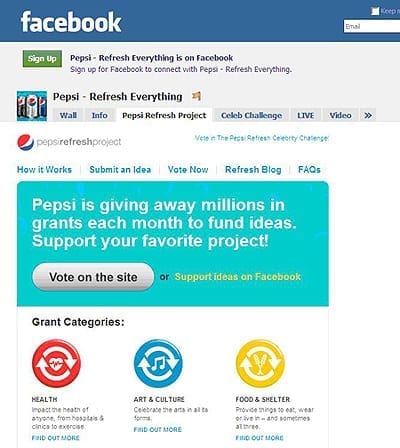 Pepsi’s Refresh Project will fund over $20 million to fan’s ideas that will have a positive impact on the world, environment, health and cultures. Pepsi’s Refresh Project is an interactive web community that engages with fans by allowing them to submit for grants, as well as vote for other’s submissions such as sending Girl Scout cookies to troops overseas, creating a diaper bank for poverty stricken families or building a garden to supply fresh produce to the local food pantry. Pepsi’s innovative social networking campaign has built an engaging community of fans who will continue to interact for months. Celebrities like Rhianna, Demi Moore and Kevin Bacon have also become a part of the Pepsi Refresh Project. They too are asking Americans to vote on which idea they’d like to see implemented.

Why not shift your advertising efforts to a free social media platform that has more than 350 million active users, of which about 70% of those Facebook users are outside the United States? There are more than 700,000 local businesses with active Fan Pages for which more than 20 million people become fans of Pages each day. It’s an ever-growing community that spans across the globe.