Lists, you’re familiar with them in Twitter, but I bet most of you have never used or didn’t even know that Facebook has its own form of lists. Just like in Twitter, Facebook Lists help you to organize things you interested in, but with the added feature of filtering the stories you see in your News Feed. Like in Google+, you can use Facebook lists to organize your friends, similar to “circling” someone in Google+, so you can spread messages to a designated group of people.

Let’s first take a look at the Facebook List feature that mimics circling on Google+.  When you decide to create lists to organize your friends, you can begin with Facebook designated categories like close friends, acquaintances, and restricted that people like your mom or your boss would fall into if you so choose. Having a restricted category eliminates issues where you stick your foot in your mouth or write a reactionary post where you are speaking disparagingly about your job since when you add someone to your restricted list, they will only be able to see your public posts or posts of yours that you tag them in.

I bet you’re wondering, “how do I use these lists?” The way you can use lists like these are when you write a post, you can then designate who will see the post like you do in Google+. After you write your post, choose who will see your posts from under the “public” dropdown menu shown below (insert image: facebook_lists_example.png). Using this feature ensures that your post will only be viewed by the people who you have selected i.e. public, friends, only me, etc. Business owners can use this feature to share messages among colleagues that they wouldn’t want shared publicly. One thing to keep in mind is that this feature isn’t available for Company Pages since every post on your brand’s Page are public and cannot be segmented like a personal profile can. 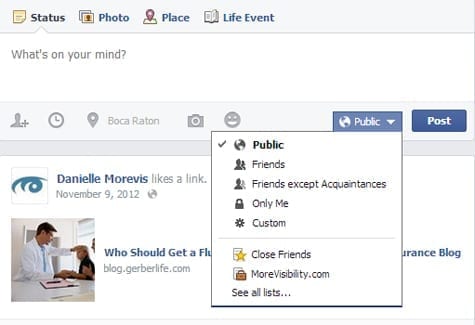 The other type of Facebook Lists are Interest Lists which are similar to lists in Twitter. Interest Lists are a way to organize the content you are interested in on Facebook. You are able to create your own Interest Lists based on the things you care about or follow other people’s lists. When you create or follow a list, you’ll see the best posts from that list in your main News Feed. Another neat feature is the “Interests” section of your bookmarks shown below (insert picture interest_list_bookmarks.png). When you click on the list’s name, you can then see all the recent posts and activity from the Pages and people featured in the list. 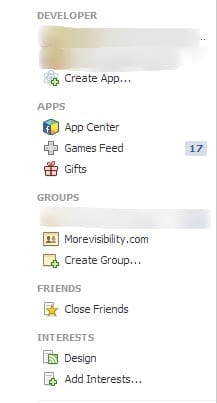 How can you use Facebook Interest Lists to help spread your company’s Facebook posts and marketing messages?

One way you can utilize Interest Lists is for a designated employee within your company, preferably a person who is customer facing, to create a list that focuses on your core business function. For example, if you are an automotive dealer, you should consider creating a list that organizes company pages and people’s profiles who write interesting and compelling posts related to cars and car dealerships. You would add your own company’s Page into the list as well and then make the list public so that any user can view and subscribe to it. Another option is to encourage your audience members to add your Company Page to their own Interest List, so that they won’t miss seeing your updates and posts. Pro Tip: when suggesting that your audience members add your Company Page to an Interest List, make sure to include detailed instructions complete with screen shots so that your audience members can quickly and easily add you to a list. Reference the photo below to see what we mean (insert picture how-to-create-facebook-lists.png). 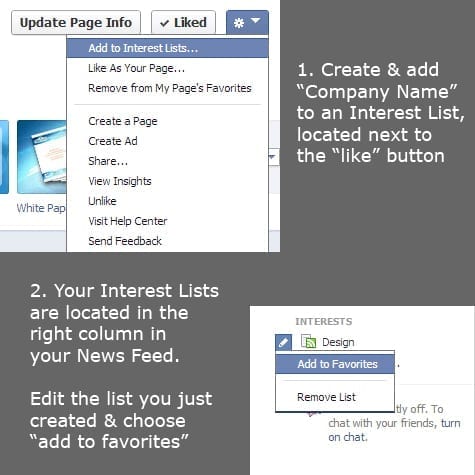 Utilize Facebook’s Lists and Interest Lists to boost your content’s reach and extend the shelf-life of your posts. This exciting feature can help spread your marketing message even further than before.