Tweeting across language borders can be challenging, but if you are marketing internationally, Twitter can be a great way to reach across cultural boundaries and engage a whole new audience. For example, did you know that the most widely spoken language in the world is Chinese? In order to use Twitter internationally, consider employing a Twitter Translator. One new promising tool comes from Mloovi.com. It takes your tweet and translates it using Google’s Translation tool: 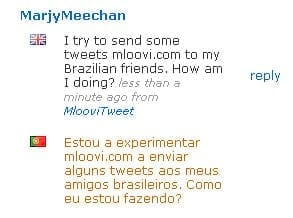 Not only that but any tweets coming in from another language can be translated into English (or whatever language you prefer – they cover 42 languages including Chinese, Greek and Arabic). If you want to try it now, go to: http://mloovitweet.com/.

If you have some knowledge of the other language and want to review your tweets before you send them, you can also use Google’s translator tool directly: http://translate.google.com.

This takes a little longer, but lets me preview my tweet before I send it out to the world.

The tool is in development now and as with any automatic translator, it won’t be perfect, so you’ll want to be careful not to challenge it with slang English terms – keep the language straightforward and simple to avoid misunderstandings. If you are unsure of this and prefer to stick to English, go ahead and tweet internationally in English as English is a popular second language and your followers will likely understand your English tweets as well. In that case, you might just want to use the tool to understand when your international correspondents tweet in their native language.

In any case, don’t be afraid to expand your world and use Twitter internationally to find new customers across cultural and international borders.