People do Connect with Brands in Social Media

Many argue that users of social media channels have no interest in connecting with companies while they are spending time within their social networks.  Recent data from emarketer and comSore make a good argument against this thought.

Social media is not a fad.  It is a change in the way that people are communicating. Whether using a desktop, laptop, Smartphone, etc. people are accessing social networks on a regular basis. In 2010 about 127 million people (57% of all US Internet users) will use a social network at least once a month, according to emarketer. This is estimated to grow to two-thirds of internet users by 2014. 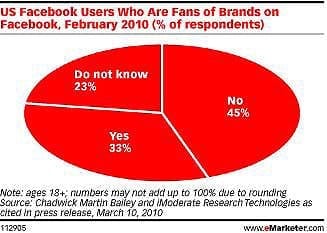 Online retailers have the ability to offer coupons, promote new products, encourage customer reviews, etc., and are thriving in social media. Those companies that have not yet ventured into social media marketing are realizing that they are falling behind and are letting the potential of social media marketing pass them by.  Emarketer estimates that 9 out of 10 companies are planning to build a presence in Facebook during 2010. Some might think that these companies are just jumping on the bandwagon. While that may be true, it’s a smart choice.  ComSore data shows that users who spend time on social networks, such as Facebook and Twitter, spend more money online than those who are not engaged in social networks.  If you have an online store, why would you not want to be in social media to put your brand in front of these individuals?

This data may also coincide with the growth of social networks. Channels such as Facebook, Twitter, YouTube, etc. are no longer just for teenagers.  The fastest growing age groups are adults, and not necessarily younger adults. This leads to more people using these channels who have a bit more disposable income than the average teenager.

While social media is extremely important for online retailers, it will not replace the importance of search engines.  Social media is great for awareness and creating a positive brand image, but when someone is really looking to research a product, they will turn to search engines. Social media does not replace search. They each have their own place in the buying cycle and enable companies to reach customers and an interested audience in different ways.