The Decline of MySpace

It seems hard to imagine just six years ago, MySpace was created, revolutionizing the internet. It can be said that MySpace was the beginning of what we all now know as social media. Two short years later, Facebook came into the picture.

Facebook has steadily grown while MySpace has been declining. It was less than a year ago that MySpace had more visitors than Facebook. However, according to comScore, MySpace had 124 million monthly unique visitors last month, a decline of 2%. In contrast, Facebook garnered 276 million unique visitors, an increase of 16.6%.

According to the graph below from Compete, Facebook overtook MySpace in December 2008 and continues its growth, while MySpace experiences a sharp decline in visitors. 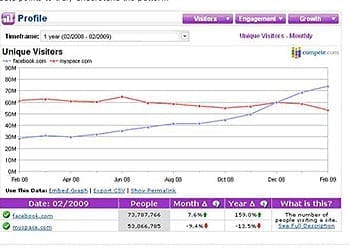 While the largest demographic on Facebook is ages 18-25, the fastest growing demographic is women aged 55 and over. This could be a major contributing reason for Facebook surpassing MySpace in the number of visitors.

By now, we know that internet users are very fickle and what is today’s social hot spot could be tomorrows passing fad. By this time next year, we could start to see other social networks, like Twitter or LinkedIn surpassing these social media giants, making both Facebook and MySpace yesterday’s new.