Is it Google?  Actually, no.  Google didn’t make it to the top this year. Google was bumped to second place by the one and only Facebook.  Who would have thought when Facebook began nearly 7 years ago, that it would become as large and as influential as it is today? There is a movie about it, there are more than 500 million people now using the site, and its users are visiting Facebook for more than simply connecting with “friends”.  Facebook draws people from around the world – supporting causes, promoting brands and celebrities, and even shopping – while staying in touch with friends.

Recent numbers from Hitwise  below show that Facebook has now surpassed Google in being the most visited site in the U.S. during 2010. What is interesting is that not only was Facebook the most visited site, Facebook was the most searched term in 2010.  Should some of the credit maybe go to Google and other search engines?  Of the top 10 most searched terms, variations of Facebook occurred 4 times, as shown in the image below. 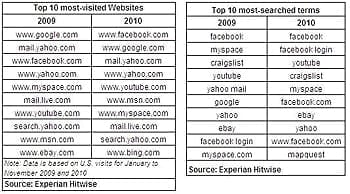 If the current trend continues as we move into 2011, it would also be extremely advantageous for companies and brands not in Facebook to consider a strategy for building a presence there.  Facebook has changed the way people find information and communicate with brands online. Also, as with most marketing efforts online, your Facebook efforts can be tracked through an analytics package as well as through Facebook’s Insights.  It will be interesting to see what Facebook will bring this year, further enhancing the opportunities for businesses.