In a nod toward the ever popular podcast movement, Twitter just announced a new feature they are rolling out called Voice Tweets. Currently this is only offered for iOS users (no word on Android yet) and not everyone has this functionality in their account yet. To see if your account has been activated for this, look for the new audio sound icon, next to the image carousal, as shown in the image below to the far left. Once you click on that, you will be live to voice record – illustrated in the middle image below. 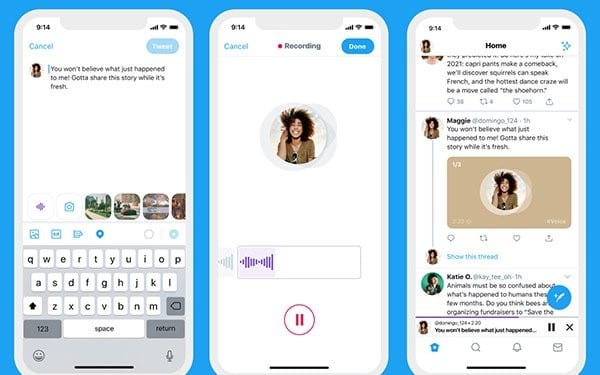 Given the rise in live chronicling, particularly during the past 3 months in quarantine due to COVID-19 and more recently within the U.S. during community protests, Twitter looks to stay competitive with other content-sharing platforms. These recordings can be up to 140 seconds long (that’s long for listening to, if not compelling content and a strong speaker), although if you go over this limit the platform will automatically populate another tweet in the thread for continuation. There is the ability to add text in the tweet, shown in the final product which is in the above image to the far right.

While there are some valuable reasons or scenarios to support the introduction of Voice Tweets, it does break away from Twitters original platform intent. Those speakers who can effectively deliver an engaging audio message in under two minutes, may find this new Twitter feature a valuable opportunity. (thinking TV journalists will love this!) Others, well ….. There could be a whole lot of rambling in the future feeds.