Twitter recently announced that it is taking its advertising to a new level – it will allow advertisers to target Promoted Tweets and Promoted Accounts to a set of interests that advertisers can specifically choose. Twitter says that by targeting people’s topical interests, advertisers will be able to connect with a greater number of users and deliver tailored messages to people who are more likely to engage with advertisers’ Tweets. 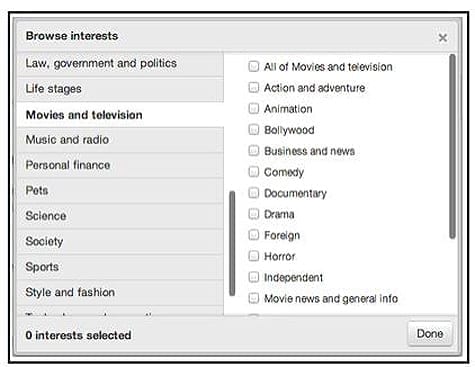 The second method allows advertisers to get more specific in targeting the Twitter universe, by allowing advertisers to create custom segments by including certain @usernames that are relevant to the product. Twitter says that custom segments let you reach users with similar interests to that @username’s followers, but do not let you specifically target the followers of that @username. This second method allows advertisers to find users who are not followers of your brand but have similar interests.

In addition, the social platform will be lowering the minimum bid to one penny for all of their Promoted auctions.  It will be interesting to see how Interest Targeting compliments Promoted Tweets and Promoted Accounts.