User-Generated Content: The Good, the Bad and the Ugly

You’ve probably heard the term “user-generated content” before, but what exactly does that mean? 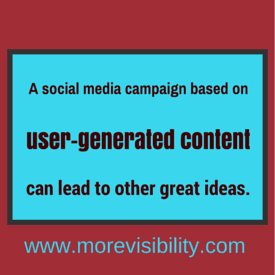 And while user-generated content can be an excellent way to promote a campaign, there are several factors you need to consider before taking the plunge into those often murky waters:

It can provide positive reinforcement. If your campaign asking users to generate content is a success, it will serve as proof that you have a strong, active community around your brand. Therefore, your current social media strategy is probably an effective one. In addition, the best proponents of your products and services are often those who use it most frequently. Provided that those users have positive things to say, they can be excellent ambassadors for your company.

Millennials love it. According to a study conducted by Ipsos Media CT, millennials can’t get enough user-generated content. The study revealed that millennials spend 30% of their daily media time with user-generated content, find it 35% more memorable, and trust it 50% more than other media. And, with a report from the U.S. Chamber of Commerce Foundation stating that annual millennial purchasing power is estimated at $200 billion and the peak of that purchasing power is still decades away, this is a group that you will want to establish a connection with.

One good idea can lead to another. If a user-generated content campaign goes well, you will likely be getting a number of new ideas that you hadn’t considered before. Of course, while all of those thoughts can’t be great, there might be one or two that could lead to additional great content. For example, if you promote a hashtag inviting users to share their stories with your brand, there may be a great idea shared by a user that can then be turned into a blog post, video, or other piece of content that you would have otherwise never come up with.

It’s somewhat unpredictable. Although there are certain ways to safeguard against the uncertain aspects of user-generated content, you simply can’t control everything. For example, while you can moderate what appears on your website or social media platforms, you can’t moderate how someone might use your promoted hashtag. And while it’s easy to say that you should have the foresight to catch any possible issues, it can be hard to do so in practice.

With all of that in mind, it’s important to remember that user-generated content won’t work for everyone. If you don’t have an involved group of users around your brand, it’s probably something you want to stay away from until you build that type of following. However, if you do have an engaged community, it is something you will want to consider, due to all the incredible benefits it can provide to your company. Still, you will need to remain mindful of the potential pitfalls and try to think through every possibility before launching a campaign reliant on user-generated content.