Articles in The 'ad settings' Tag

Last month, Microsoft adCenter announced that it was planning to release a new ad rotation option and the new setting is now live within the advertising platform.

Advertisers now have the option of two different rotation settings — the first option is to show your ads that receive the most clicks most frequently, while the second option is to have your ads rotate evenly, regardless of the number of clicks the ads received. In the past, Microsoft adCenter only had one setting to rotate all ads evenly.

When an advertiser chooses to rotate their ads more evenly, they will have the option to test different ad headlines, description text and vanity URLs to see what performs best according to their metrics and campaign goals. Using the ad rotation option to optimize for clicks allows advertisers to have the search engine automatically show the better performing ad, based on the click-through rate metric, but may not always be in line with other goals such as conversions or even cost-per-acquisition.

To update your ad rotation settings in Microsoft adCenter, in the Settings tab of your ad group, go to Advanced Settings and you will see the new ad rotation option. The default setting is to optimize for clicks.

Last month we announced that Google AdWords updated its ad rotation settings, and now Microsoft adCenter is releasing an ad rotation option in the next few weeks.

Microsoft will allow advertisers two options for ad rotation at the ad group level; in the past, all ads rotated evenly and advertisers did not have an option. Now advertisers will have the ability to choose to have adCenter optimize rotation for clicks or to keep ads rotating evenly.  Microsoft said its goal is to help advertisers create compelling ads to collect more clicks from targeted audiences.

Microsoft is encouraging advertisers to test the new ad rotation setting as well as identify optimal selling points for their audiences within ad copy. Strong ad copy is important because it’s a searcher’s first impression of your product or service. In addition, effective ad copy will only help your paid search marketing efforts by generating more clicks and traffic to your site, while increasing your click-through rate (CTR) and helping to bring a lower cost-per-click (CPC).

The ad rotation setting is just another feature that adCenter has added to its interface to make it easier for search engine marketers to advertise on the search network. Microsoft recently updated its location targeting capabilities, ad description length and implemented mobile device targeting.
Below is a screen shot of the new settings at the ad group level in Microsoft adCenter. 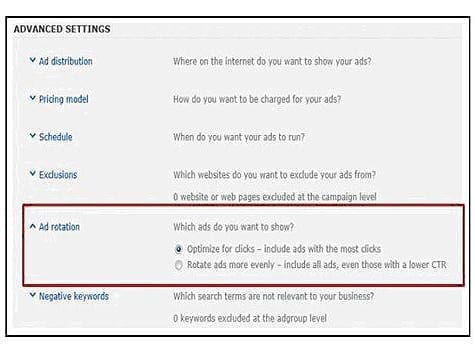 Posted in: Search Engine Marketing
May 8 2012

Google AdWords recently announced an update to its Campaign settings for keyword matchings. Now they have said that its ad rotation setting will also change.

Below is a screenshot of the old Ad rotation settings:

Google says that starting next week, instead of rotating ad creatives for an indefinite period of time, this setting will only rotate for a 30-day period. After this period, the setting will then optimize to show the ads expected to generate the most clicks. Every time a creative is enabled or edited, the ads in that ad group will rotate evenly for a new period of 30 days.

Google says that this change will enable them to provide users with the most relevant ad experience and should help advertisers improve the performance of their accounts.