Articles in The 'enhanced campaigns' Tag

With the introduction of Enhanced Campaigns, sitelinks are getting an entire revamp. The following are several updates to sitelinks within Google AdWords to increase advertiser performance. 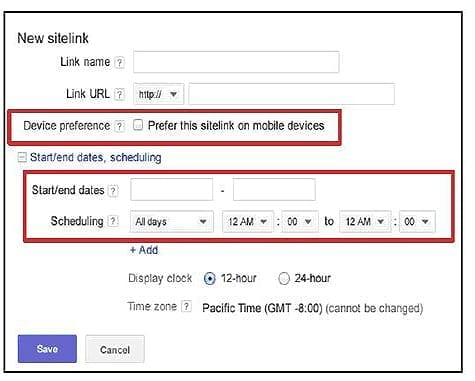 Enhanced Campaigns will reach more searchers with fewer campaigns. Instead of having separate campaigns for specific devices and locations, advertisers will be able to on bid per keyword on desktop/tablet devices and a separate bid per keyword for mobile devices. In addition, there won’t be a need for separate campaigns for multiple locations because advertisers will be able to set adjustable bids based on location. For example, an advertiser can choose to target a higher maximum cost-per-click (CPC) for locations where they have actual brick and mortar locations and bid lower for CPCs in non-brick and mortar locations. With Enhanced Campaigns, previous accounts with multiple campaigns will now roll up into fewer enhanced campaigns.

Google says that it will show smarter ads optimized to the user. Creative, sitelinks, app or extensions will be selected based on the user context and device capabilities. Advanced reporting will be introduced with Enhanced Campaigns to be able to measure new conversion types. Click-to-call links from mobile devices will now be free; previously they were the average CPC of the campaign, and will be able to be tracked as conversions. Furthermore, digital downloads, in-store purchases and cross device conversions will all be measurable within Enhanced Campaigns.

Yesterday Google announced an upcoming change for AdWords called Enhanced Campaigns that will go into effect in the second quarter of this year and affect all campaigns within the ad network.

Google says that over the last few years, user behavior has shifted to where people are using multiple devices, i.e. computers, tablets and smartphones, based on what works best for where they are and what their goal is. Because of this new behavior, Google is shifting its campaign settings so that all devices will be rolled into one campaign and Google will consider desktops and tablets as one device. Advertisers will be able to opt out of mobile devices by bidding down on the device, but will be unable to opt out of desktop/tablet devices all together.

There will be a gradual transition to Enhanced Campaigns and Google will not force a migration of the change until late in the second quarter.

Advertisers will be able to specifically create ads and extensions for mobile devices. In addition, sitelinks will be introduced at the ad group level and we will be able to see reporting for each individual link. Currently, sitelinks and its statistics are set at the campaign level. What’s more, Google says that it is working on advanced reporting to be able to see multi-device attribution to determine how many devices a visitor uses before converting.

Our Executive Vice President, Danielle Leitch, was quoted in the Wall Street Journal in regard to the release of Enhanced Campaigns.