Since launching Facebook Deals four months ago, the social network has decided to exit the online daily deal business with industry-competitors like Groupon and Living Social, in the near future. Facebook emailed the following statement to Reuters:

“After testing Deals for four months, we’ve decided to end our Deals product in the coming weeks. We think there is a lot of power in a social approach to driving people into local businesses. We’ve learned a lot from our test and we’ll continue to evaluate how best to serve local businesses.”

Facebook says that they are planning to keep Check-In Deals, which works differently than Facebook Deals. Check-in Deals are based on people’s Facebook check-ins when they visit your business. You can run check-in deals across multiple store locations, and create different types of deals to achieve different business goals.

Check-In Deals is currently available to all businesses in the United States and Japan and is free to create, although the product, its availability and pricing are subject to change in the future.

Facebook Social Deals required businesses to have a Facebook page and allowed the merchants to offer deals that didn’t specifically offer a percentage-based discount. In addition, Social Deals was only open to five cities: Atlanta, Austin, Dallas, San Diego and San Francisco.

Facebook has entered the daily deal online market with its recent launch of “Social Deals” to compete against daily deal sites like Groupon and Living Social. In the past, Facebook originally rolled-out “Facebook Deals” to offer deals to its users when they “checked-in” to places. “Check-in deals” has replaced Facebook Deals and is directed toward both national and local businesses, whereas the new “Social Deals” focuses on bringing the online social experience into the real-world by focusing more on local businesses. The goal is to keep deals more social with events and classes in users’ local areas than traditional daily deals like tanning or massages.

Facebook Social Deals are different than other daily deal competitor sites because they must be purchased up front using Facebook Credits. What are Facebook Credits, you ask? According to Facebook, they are a virtual currency you can use to buy virtual goods in many games and apps on Facebook.

One major difference between Facebook’s Social Deals and other daily deal sites is that deals will not always involve a discount.  Daily deal sites like Groupon and Living Social have become leaders in the industry by advertising their 50 to 90 percent discounts. Unlike most traditional daily deal competitors, the merchants will also be permitted to set caps on the maximum number of deal vouchers that can be purchased.

See below for a snapshot of Facebook Social Deals: 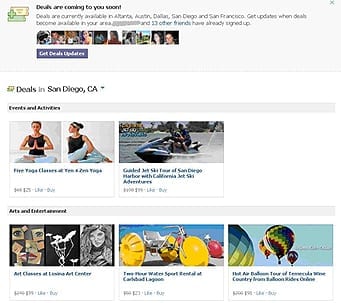 Facebook is preparing to launch a new competitor for deal-of-the-day sites like Groupon and Living Social called Facebook Deals. The social network wrote, “Try new things with friends. With Deals you can easily find great new restaurants, shows and group activities to share with friends.”

The program will allow Facebook users to get coupons and discount offers from partner services. Facebook has not announced if it will require a minimum number of buys before the deal can be claimed, similar to what Groupon does.

Facebook has also launched a business version of Facebook Deals where it partners with your company and does the marketing, generates a buzz and sales for your deal and builds customer loyalty.

With over 600 million users, Facebook has a vast audience to introduce this new flash deal subscription to, and may give Groupon a run for its money; although it may be hard for any newcomer to catch up to Groupon. According to eMarketer, Groupon had $33 million in sales in 2009, and sky-rocketed to $760 million in 2010.