Klout (www.klout.com) measures a person’s influence in aggregate of all of their social networks (at least those currently integrated with Klout).  The San Francisco based company has scored over 80 Million people since 2008.  The unit of measurement compiled is called The Klout Score and is a number from 1 to 100.  The higher the score, the more influence Klout has computed that you have. 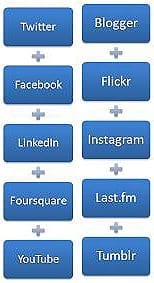 Keeping with the trend of social media companies having their very own buttons, Klout introduced the +K Button in June.  The +K Button is similar to Google’s +1 Button in that you are making a recommendation.  In Klout’s case, you are recommending an individual as a good source of information on a certain topic.  You can read more about the +K Button on Klout’s Blog.

Social Media Doesn’t Have To Be Scary

From time to time clients express to me that they are scared of social media. I am not kidding. They have literally said those words to me. Either they do not know enough about it, or it’s the exact opposite; they know too much and recognize how much time, effort and manpower it takes to establish an effective social media strategy. The key word here is “effective”. Anyone can join Facebook, or Twitter. Uploading images on Flickr is simple enough and writing a blog is also relatively easy. That being said, what many companies seem to have issues with is doing the above mentioned social media platforms correctly for businesses.

Even the most savvy social media user can become overwhelmed by all of the options available and the list is rapidly growing. Here is an idea as to how you can implement a social media strategy correctly, without becoming overwhelmed and the best part is that it won’t break the bank!

With summer upon us, a large percentage of college students are available and willing to work as interns. Why not employ a few to manage/maintain your social media efforts? If you utilize this cost effective approach, the most important thing to keep in mind is that you ought to have a game plan in place. A few things to ponder: What will your interns be doing exactly? Who will oversee their efforts? How often will they tweet? What will your Facebook corporate page/profile look like? Will a knowledgeable person train and guide them to ensure that they are well versed? Just because they know all about Facebook from a personal and/or social perspective, does not equate to them having knowledge from a business standpoint. All of that being said, it will be money well spent to engage in a social media training program of some sort.

It doesn’t have to be scary to dive into social media, although, it is mission critical to make sure you are doing it right! Good luck getting social!