Articles in The 'Google-Adwords-Blog' Tag

I have been responsible for the development of MoreVisibility’s software that relies on the search engine’s APIs to manage and report on paid placement campaigns.  I have been working with the Google AdWords API since version one, back in 2006.  The latest and greatest release was announced Oct 7, 2011 and is about the fifteenth version.  Back in 2009, they stopped using the sequential release number nomenclature at V13 in favor of a year time stamp.  The newest release, V201109, has been eagerly awaited by the development community.

Back in the spring of 2010, in conjunction with major version releases, Google began inviting developers to attend an API workshop hosted in one of their seven offices in major metropolitan cities, such as London, Singapore, Tokyo, San Francisco, New York.  This year I attended the NYC workshop and was able to meet the hard working Google developer advocates and fellow developers that I have been corresponding with via their forum.  It was great getting to put a face to these helpful developers and to thank them for their tireless efforts to keep the developer community productive, via guiding us through their various versions of the APIs based on the AdWords platform.  It was also a chance to get a better grasp on the new versions’ complexities, and take away best practices for security and efficiencies.

One of the most important functions exposed in the API is their reporting module.  For agencies to effectively manage multiple clients’ budgeting, we need to get complete data efficiently at our finger tips.  I believe that, in an effort to keep AdWords competitive Google will quickly deploy new advertising channels, without addressing the ease of measuring/reporting on these campaigns.  As an example, many developers were unhappy with the V2009 series of releases, due to the fact that the new Remarketing channels’ data was very difficult to report on, due to it being buried in an Ad Performance Report and not in their Keyword Performance Report.  Many in the development community reported the problem to the AdWords API forum and began requesting a super report that would properly provide metrics across all types of campaigns, such as traditional search, display, remarketing, mobile, location and whatever else Google deems worthy for effective internet advertising.  As developers, we did not like to impose mandates to our team for the naming convention for certain types of AdWords campaigns, which would then allow our application programs to locate and manage the metrics.

The Google AdWords API developers processed our feedback and deemed it a high enough priority to address in their next release.  The new “uber” report, Criteria Performance Report, which allows the downloading of all criteria types in one report was part of their latest release.  To differentiate between the criteria, a new criteria type field has been exposed in the reporting, which allows for filtering upon pulling data and categorizing when pulling all data.

Also found in the latest release, is a new authentication option; the popular three legged OAuth, which is a commonly deployed open standard.  While this may not be needed by all agencies, many at the conference had a need to obtain this method for account access to client’s not able to migrate to their My Client Center for one reason or another.  Security is an important component for Google across all product platforms and a top concern of advertisers when entrusted with the management of their client’s hard earned advertising budget.  So it is not surprising that Google expanded their options for authentication.

The workshop included a Mobile Best Practices track presented by, Sumit Chandel.  Sumit had a wealth of statistics on the smart phone’s explosive growth and projections for the mobile internet users and their searching.  It is expected that mobile users will surpass desktop users by 2013.  This will require advertisers to have a fully functioning mobile presence.  If you are still grasping with how to accomplish and could use some assistance in setting up your mobile site, please reach out and ask about our newest CMS for mobile product.

AdWords allows you to actively drive traffic via mobile targeted campaigns and ad extensions.  AdWords does not leave out any bells and whistles for creating highly targeted mobile campaigns.  One can select the carrier, language, platform, operating system, location, product and proximity that you would like for your ad to appear.  AdWords will even allow one to leverage an extension for a click-to-call functionality.  This will present an extra line of content in your ad for a clickable phone number.  Being that this is a Google platform, they have tightly integrated with their Google Voice product to capture the call metrics, like number of calls and completed calls so you are able to measure your success.

One of the best takeaways from the conference is getting to know what Google is working on for future AdWords API releases.  We can expect to see location targeting to the zip code level and shared objects for the efficient use across campaigns.  As the mobile explosion continues to grow, they will continue to expand mobile device targeting options.

There is a new Adwords report released which allows you to drill down into how clients are interacting with your ads and ultimately what this means for campaign performance and conversions. Some of the new features to enhance your Google ads are included as reporting options; this includes Site Links, Product Extensions and Click To Call. 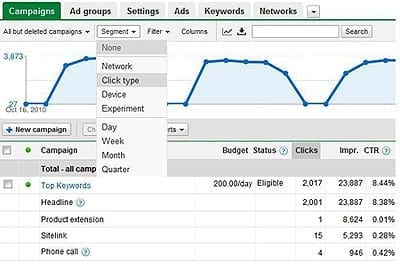 In this screenshot above, taken from Google’s Inside Adwords blog announcement you will see how this report looks – which will also can illustrate when searchers click on the Headline in your ads.

I have worked with many different search engines for a long period of time.  Although each search engine remains unique in the tools they offer, one thing remains the same; the required minimum bid.  However, only a short while ago, Google was the first to break this mold by eliminating required minimum bids.  This monumental decision has had a ‘ripple effect’ through the entire Google Adwords interface.

In the past, keywords were deemed ‘inactive for search’ if a client was not reaching the required minimum bid.  Now, Google has revised this procedure to be more of a quality based approach.  Since there are no minimum bids, Google now informs advertisers when keyword bids are below the first page bid estimate.  The suggested bid amounts vary per keyword and reflect the approximate bid that is necessary for first page search results.

Here are some suggestions to help manage your campaign, based on these recent changes.  Since there are no minimum bids, you want to be sure your ad is not becoming lost in the back pages of Google; this becomes increasingly important for competitive industry keywords and phrases.  Also, be sure that you are still closely monitoring your quality score; the level of the quality score will still impact the position where your ad is being displayed, despite your maximum cost per click bid.  Lastly, stay abreast of current Google tools and features by accessing the official Google Adwords blog and the MoreVisibility blog.  Staying current with industry news will help to keep your account in good standing and remain ahead of the curve when new changes are implemented.