Articles in The 'Industry News' Tag

Bing Seeks to Prove Its Search Relevance with Bing it On

In a cheeky nod to the 1980s, Bing has initiated its very only Pepsi Challenge-esque blind taste test — Bing it On. 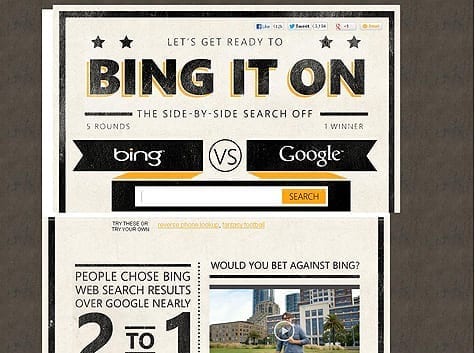 Bing it On prompts users to enter search terms in an elegantly designed page and asks users to choose which SERPs they like the best in five rounds. 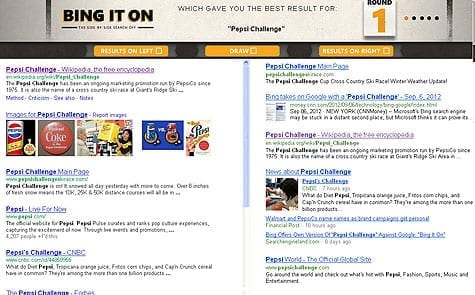 The results may be completely antidotal, but Bing doesn’t think so. Bing says that users are choosing their results over Google’s two-to-one. That’s a powerful claim, but not one that can be independently verified.

What this does prove, if anything, is that Bing has upped its game. Its SERPs are no longer as visual as they once were. Instead, they’re giving people more of what they want — information — with an algorithm that seems to put variety first, and influence second.

What this means for marketers is that, more and more, search is segmented. While Google is still the leader, Bing is making an effort to bring more eyeballs its way — an effort that, if these search stats are any indication, will probably pay off over time.

In a divisive battle between Google and Bing, the two search giants have both made incredible strides in search quality over the past few years. Although Google has held a vast majority of the market share for quite some time, Bing is determined to change search engine user perspectives and garner a bigger piece of the pie. This competition is becoming exceedingly beneficial to business owners with a strong web presence. As the search landscape grows, it is of the utmost importance not to commit your attention to Google alone.

Bing has become so incredibly confident in the quality of their search engine that they have even launched an online challenge with Google. This challenge titled Bing It On was introduced by Bing on September 6th and gives users the ability to perform a search while obtaining results by both Google and Bing in a side by side comparison. Many people might remember a similar test called the Pepsi challenge. Most elements which could identify the search engines has been stripped and allows for a truly blind comparison. After each search the user is asked to choose which results page was more helpful. After 5 searches the users is informed of which search engine they preferred or if there was a draw.

Although this challenge will certainly not give Bing a major boost in search engine market share overnight, it may greatly help their reputation. There is no doubt that Bing is more of a major player than ever. Microsoft’s director of Bing Stefan Weitz was even quoted as saying “if you strip the brands off and show people the results side by side we knew we’d win.”
The table below shows the most recent search share results from comScore. Although Bing is clearly lagging behind Google, they are making strides to catch up. 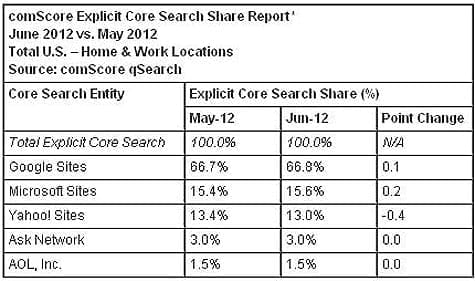 This will be a long and arduous fight for search engine dominance, but users and business owners can benefit greatly in the meantime. The increase in search quality by both engines will highlight companies that adhere to strict SEO best practices standards and grow their web foot print. If you publish unique and quality content, maintain a search engine friendly site, and abide by SEO best practices then a Bing resurgence can be a great traffic driver for your website.

The Foursquare mobile application caters to a very specific group of individuals; highly engaged users who usually live in major cities, have a significant amount of friends, are socially active and have a desire to discover new places on a regular basis. With big players like Facebook and Yelp releasing their own versions of “check-in” features this year, Foursquare is trying to ensure continued growth by expanding their network.

Last week, the company announced the roll-out of Foursquare 2.0 which focuses more on pulling in information of what’s around the user than pushing out information of where they are.
The below screenshots highlight how “Tips” and “To-Dos” now have their own section in the interface. 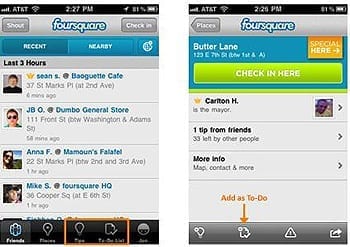 By making these features more prominent and more of a focus within the application, Foursquare has the potential to increase their audience.  “Tips” have evolved from entrée recommendations at a nearby Italian restaurant to traffic alerts from local news channel. “To-Dos” serve as another useful organizational tool that allows a user to save reminders about a particular location. With Foursquare 2.0, the application is positioning itself as more than a social check-in service and can now reach those who are looking for a hub of useful local information.

Posted in: Social Media
1 2 Next »
MoreVisibility