Articles in The 'search funnels' Tag

Last month Google AdWords introduced Search Funnels columns within their advertising platform by allowing advertising the ability to add such metrics within the AdWords interface. Search Funnels show how searchers conduct queries for products or services before a conversion takes place and allows advertisers to make educated decisions on how to formulate keyword pay-per-click (PPC) campaigns.

Previously advertisers would have to access Search Funnels via Google Analytics to view this information. Google has simplified the optimization process for advertisers by adding Search Funnels columns within the AdWords interface. 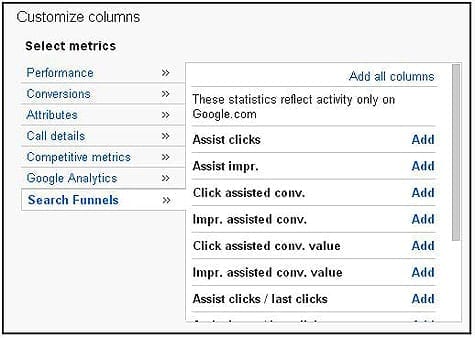 Use these metrics to find out what keywords are best at assisting conversions or are being viewed immediately before a conversion takes place on your website. You can use this information to insure that you are not eliminating keywords that are assisting conversions, and instead choose to decrease your bids on these terms to avoid high costs.

Last week, Google announced a new set of reports within the AdWords interface called Search Funnels, which are rolling out to all AdWords accounts within the next few weeks. With search funnels, advertisers will be able to obtain a truer sense of value and attribution for keywords that help in the conversion process.

Currently, AdWords assigns credit to a conversion to the first click’s keyword, ad, ad group, and campaign up to 30 days after that first click occurred. For example, suppose I perform a search on Google for the term brown shoes on March 29th. I click on the ad, view a couple of pages, but I don’t convert. Two weeks later, say, April 11th, I search for brown dockers shoes, click on another ad, and this time I convert. AdWords will assign the credit for the conversion to my original search term of brown shoes (provided the advertiser is bidding on that keyword).

Now, with the new search funnels report section, I’ll be able to see which AdWords keywords helped my original keyword convert, as well as a funnel (hence the name) of each keyword that led to a conversion in succession. This new search funnels report section is going to have nine different reports like “assisted conversions”, “last click analysis” and “top paths” to perform deeper conversion analysis than possible before.

Why it’s “the right step” toward proper attribution
Before this product launch, you had two possible options for assigning credit to a keyword for a conversion. You could log-in to AdWords and view the reports in the interface (first-click attribution), or, you could use Google Analytics to view the keywords that matched goals (last-click attribution). If you were an advertiser, you would, over time, start bidding more for the converting keywords that either AdWords or Analytics were displaying, and less for the “non-converting” keywords. As it turns out – and as the more experienced marketers long ago deduced – other keywords lend a big helping hand along the way, but never received the proper credit. What would happen is that advertisers would either shut down those keywords that didn’t appear to convert, or change their bidding philosophy to such an extent that these assisting keywords become irrelevant over time. The result: the number of conversions would struggle to climb, leaving advertisers scratching their heads.

Now, we can assign importance and value to those assisting keywords, and not automatically cast them off as losers or rejects. They are an integral part in the conversion cycle; keywords that assist in the conversion process should remain active and managed intelligently for optimal campaign success.

Why it’s only “a step” at this point
It’s not an end-all, be-all solution, but it’s a great start. Search funnels in AdWords does have a few limitations. First, you must import your Google Analytics goals into AdWords, which is not a big deal for an administrator, but still something that must be done.

So, true attribution – if there is even such a thing – is not yet within our grasp. But with search funnels, Google has taken a very large step toward that general direction. I recommend you log-in to your account today, import your goals, and discover which assisting keywords should be optimized for greater campaign success.