Articles in The 'shopping comparison' Tag

Google recently announced that the Merchant program will be transitioning to a new commercial model, called Google Shopping. Google said that the reason for the migration is because the user experience was not universal for all listings and users would see different listings because the data was not properly policed. Also, smaller merchants could not compete with sellers like Amazon or eBay. Google hopes the new commercial model will create a better user experience as well as level the playing field.

There is no definite launch date for Google Shopping but rumors are June 30th/July 1st. Meanwhile, transition from Merchant to Shopping will be gradual. The process will not be complete until the fall (estimated to be October). As of now, the transition will be only for the U.S. and the remainder of the world will still have the option to use Google Merchant for organic listings and free clicks.

To entice Google Merchant users to set up Product Listing Ad (PLA) campaigns in AdWords, Google is offering a $100 credit to users who create PLA ads by August 15, 2012. In addition, advertisers will automatically receive a monthly credit for 10% of their total PLA spend through the end of 2012. Advertisers must fill out this form to receive the credit.

Additionally, the PLA campaigns are eligible to run on a cost-per-acquisition (CPA) model where you only pay Google if they bring you a lead or a transaction. To use the CPA model, you must set up Auto Targets within the PLA campaign.

Google recently announced a new product called Google Shopping that will improve the online shopping experience.  It allows online shoppers to easily research purchases by comparing different products, features and prices, then directly connect to merchants to make their purchase. Google will phase out the free clicks on Google Product Search listings and retailers will bid for placement of their products in search results in the new Google Shopping program.

Google Shopping will be built on Product Listing Ads and will be a commercial model in the fall of 2012. Google believes that having a commercial relationship with merchants will encourage them to keep their product information fresh and up to date and will lead to higher quality data and a better overall online shopping experience for users.

The new shopping tool will use a combination of relevance and bid price to rank products. Instead of merchants bidding on keywords, merchants buying Product Listing Ads bid on the amount they will pay if their product listings in search results attracts clicks or result in sales because, Google Shopping will have two models — cost-per-click or cost-per-acquisition.

Below is a screen shot of what Google says the new Shopping program will look like on the search engine results page. 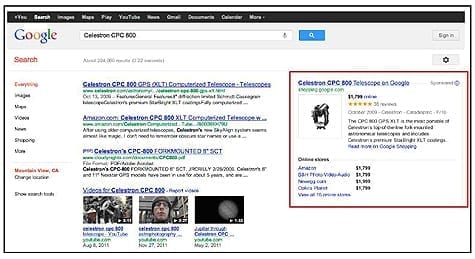