Articles in The 'video ads' Tag

LinkedIn has introduced video ads on their social media advertising platform to target to its 175 million members. The new video ads will appear in the standard 300×250 ad units across the LinkedIn site and will compete with traditional text and image ads for impressions.

The targeted video ads take over the entire ad space when clicked and allow LinkedIn users to click directly through to an advertiser’s site once the video has completed playing. In addition, advertisers can target professionals by job title or function, industry, geography, company size or name as well as other targeting options for these video ads.

These video ads are available on pay-per-view and pay-per-click models and can be created without having a set media buy. Advertisers can set daily budgets for a campaign as low as ten dollars per day with a minimum cost-per-click of two dollars.

Below is a screen shot of how to create a video ad on LinkedIn. 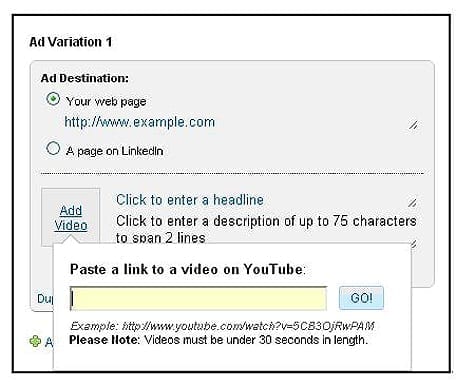 I recently created a vertical marketing campaign for a client and was very impressed with the options Google offers to manage this type of strategy.  It doesn’t seem like too long ago that a proposal of this size would have constituted multiple media buys across many networks and websites and the management of the program would have been a major task.  Just keeping up with all of the different invoices from each media buy was a full time job, not to mention that each network or site had its own way of reporting results!  With Google’s Placement Targeting program you can create a robust, wide reaching vertical marketing campaign and manage the program all in one place!

The advantages from both a management perspective and the ability to reach your precise audience with Google’s Placement Targeting program are substantial.  I was able to create a campaign targeting over 50 specific vertical sites for my client and manage the program all within one interface.  I didn’t have to spend time going to each website to negotiate 50 different media buys and I was able to get consistent reporting for the entire campaign.  My client was impressed by the extensive list of sites available to them within the Google Content Network and particularly liked the idea of one invoice to cover the costs of the entire campaign.  Within the Google Content Network, depending on the publisher’s site, you can place targeted text ads, banner ads, or even video.  We were able to leverage these different types of ad formats, testing regular text ads, banner ads, and videos across many of the sites we utilized during the campaign.

The final results are still pending, but it is certain to be a campaign we will look to build upon in the future.  With the flexibility and options available within the Google Placement Targeting program, I was able to offer my client an easily managed vertical marketing campaign.  The next time you consider a vertical marketing campaign think of all the advantages a “one stop shop” solution can save you in time and effort.

A Picture is Worth a Thousand Words

In the beginning years of the internet the only option for internet marketing were text ads, with limited character space, which gave little room for expressing a message. Today, businesses have a myriad of options from banner ads, to rich media ads and becoming even more prevalent, video ads. This is definitely a plus in a world where a picture is worth a thousand words.

Let’s talk about banner ads. Banner ads come in many different forms and sizes. They can be jpegs, gifs and for the truly advanced they can be done in flash, which is a form of rich media. A static jpeg or gif banner ad allows a business to include more detailed information about their business and/or product and present it to a potential consumer. A perfect example would be one of our convention center clients. When they were advertising for an upcoming convention it was quite a task to fit the date, location, call to action and a price offer in a text ad, while making it eye catchy. However, static banner ads came to the rescue. We created banner ads that included all the above and made it eye catchy. The client received more response from the banner ads than the text ads that were created for them. The next step up after a static jpeg or gif banner ad is a flash ad.

Flash banner ads allow consumers to interact with them. A couple examples would be mini animated videos with a call to action at the end, as well as ads that request information and give a result. An example of the mini animated video would be an ad that we created for an orthodontist client.  The client is offering a discount on children’s braces during the Christmas season. A 30 second flash ad was created showing a snowman with crooked teeth; we added some “sparkle” to his holiday and magically he received straight teeth with braces.  The end of the animation offers a discount on braces.

Another example of flash banners is an ad that I came across with my colleagues. Dunkin Donuts has an ad that asks you to put in your zip code. Upon receipt of your zip code the ad tells you the breakfast deal at the nearest Dunkin Donuts, along with an image of a delicious bagel and a hot cup of coffee for only $0.99. This ad was very effective, seeing that my co-workers wanted to go for a walk to the Dunkin Donuts across the street.

Another way to grab a consumer’s attention is through video ads. A business can place video ads on their site or they can advertise on a website like YouTube. According to Wikipedia, YouTube “is a video sharing website where users can upload, view and share video clips.”  One side note, if you’re going to advertise on YouTube you ought to be creative. According to Google, regular ads don’t cut through the clutter because people are looking to be entertained.

Now that you know a picture is worth a thousand words and a good investment, go experiment.