My Back To The Future, Grateful Dead, Whole Foods, Internet, Direct Marketing Moment

I rented Back To The Future last week, having not watched it start-to-finish in many years. What struck me most was the realization that enough time had gone by since I first saw the movie in 1985 for there to be a similarly seismic contrast between the world of 1985 to 2010 as there was between 1985 and 1955, where most of the movie took place. Everything seemed so simple and content in 1955 and Michael J. Fox spent the better part of the movie grappling with how fundamentally different life and it's pace were.

Two instances have occurred during the past week that ride along the Back To The Future theme and demonstrate how dramatically technology and the internet have altered our lives. They have had an analogous impact on Direct Marketing and the best ways to reach a desired target audience.

My first experience was reading a fascinating article in the New York Times about how coupons have evolved from a one way tool for merchants to drive traffic into their establishments to a golden ticket for a journey into the mindset, history and likely future decision-making of each individual who redeems one. The degree to which companies using this technology can zero-in on individuals is unprecedented and many people consider it invasive.

The article notes that through an individual barcode on each coupon, a merchant can potentially receive data such as the FaceBook ID of the individual (if the coupon was found somewhere on FaceBook), the search term used to locate the coupon and personal buying patterns, etc.

Below is a snapshot of a coupon for Whole Foods from 1985. Many people probably aren't aware they existed that long ago. I sold it to them as a part of coupon books I put together while in college. When you contrast the coupon with the article about the coupon of today, it is absolutely incredible how different things are. Also, take a look at both the Coupon Page of the Whole Food's website and how they have grown from two stores in Austin, Texas to 270 today with 54,000 Team Members. 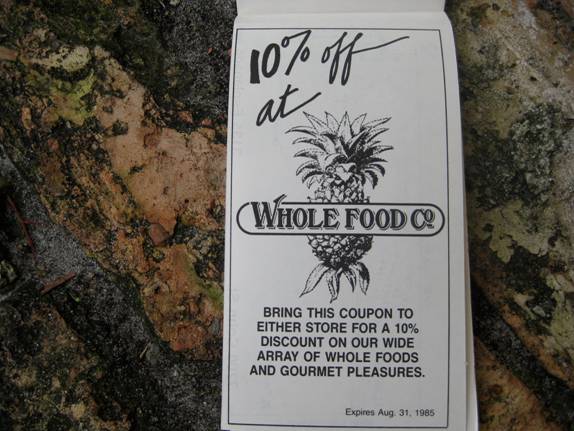 My second  Back To The Future type experience was going to see the "new" movie from the Grateful Dead: Crimson, White & Indigo .  The movie is the entire July 7, 1989 concert from JFK Stadium in Philadelphia. It was the last live concert ever at the 100,000 capacity venue.

I wasn't at that show, but I was at the one six days later in Washington, DC, so watching the movie had a Yogi Berra-like dimension to it. 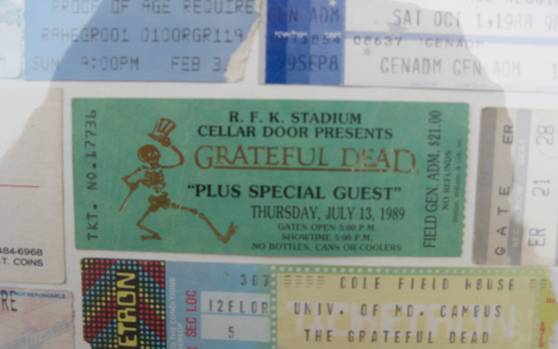 The Dead stadium concerts of that era were a combination of great music and freak show. The movie emphasizes their music, while placing surprisingly sparse focus on the 95,000 or so unique individuals in attendance. Surprising translates into practical given the video capabilities at the time. Had this movie been shot today, there probably would have been a lot more integration of crowd video, as it is so much more viable to shoot (and share) now. The Grateful Dead is a wonderful example of a "then and now" survivor story.  The band members (sans Jerry Garcia) are still thriving musically and have led the way for other bands in terms of distribution of their music and live concerts through channels like Archive.org, Live Downloads, Furthur, and Sirius/XM.

The moral of this story is neither obvious nor can it be generalized, but it points to the fact that change is much more significant than we can appreciate at the time and also that there are clearly businesses / bands who kept pace and adapted and those who have not. Think A&P and The Guess Who.