Remember those days when cell phones and tablets were not part of our daily life? For many of us today smart phones, tablets and in general mobile devices are essential on a day to day if not hour by hour basis.

Google shows that as many as 80% of US smartphone users do not leave home without their mobile device. Mobile has become an important platform for search as 61% of smartphone owners perform searches on their smartphone every day and 1 in 5 searches originates from a mobile device.

With search tracking on mobile devices maybe surpassing search in computers this year, advertisers should consider adding Mobile Strategy at the time of Marketing Budget Planning. In April of 2013 Google studied 327 advertising accounts for smartphones, and found that 88% of clicks on mobile search ads were incremental to organic clicks.

To allow advertisers to tailor their message to their consumers in multiple devices and simplify the campaign management, Google introduced AdWords enhanced campaigns earlier this year by considering a user’s location, device, the time of day and other important context signals; allowing advertisers to put the right message in front of customers at the right time.

Whether the main focus is on building a brand or performance advertising, mobile is a very important element to reaching the audience. Google research shows 90% of people move between devices to accomplish a goal. Reaching customers on-the-go is more important than ever before.

2013 IDG Global Solutions survey based on 25,601 worldwide technology professionals and consumers describes how important is to take in consideration not only the North American and European market where the tech users has always been predominant but the emerging regions like the Middle East and Africa, Latin America and Asia Pacific where anywhere in between 30% to 43% of users use their tablet more frequently than a laptop or a desktop. Globally speaking 83% of the survey respondents own or use a smartphone device. 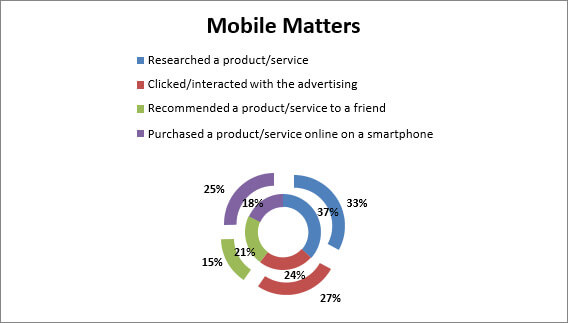 Users have a very personal relationship with their devices. People are not just recommending and clicking on advertising they are also very active buying via mobile.

This is a great time to engage in mobile advertising and get involved in a strategy that is as important as the initial stage of online advertising was more than 15 years ago.