This article discusses the evolution of the distribution of music, including the current “fork in the road”, which is likely to impact format, breadth and cost of the music listening experience moving forward. 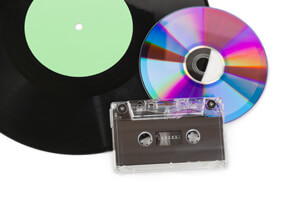 As you may remember, beginning sometime in the 1970s, cassettes usurped records as the preferred way to purchase and listen to music. They were mobile and durable; though inexact…. Unlike with records, finding a particular song that you wanted to play was a guessing game.

Compact disks came onto the scene in the early 1980s. The first album to be released on CD was Billy Joel's 52nd Street in 1982 (Wikipedia). CDs were also highly mobile and wonderfully allowed for precise song selection. Over the next two decades, CDs would dominate the landscape. As a result, many people assembled a deep (and costly) collection of CDs.

iTunes launched in 2001 and things were never the same. Instead of physically buying music, you could download it onto a player. Format adoption was gradual, but over the next several years, the iPod came to dominate. The transition to digital music had begun and one of the things that cemented its ascent was the fact that you could import your existing CDs to iTunes and other emerging channels, thus fully leveraging your prior investment in CDs.

Today, a revolutionary new option exists that requires a thoughtful choice. Services like Google Play and Spotify allow you to stream what is essentially the entire catalog of music that was ever commercially produced. It’s all there and can be accessed for roughly $10 a month across all of your devices. Read a review of an album in Rolling Stone or get an email that your favorite band has a new release, and you will be able to listen to it whenever you want.

The fork in the road that I reference early on in this article is whether to continue buying new albums as we all have in the past or to instead subscribe to a digital service where $10 a month gets you access to everything. For the individual who buys an album a year, this may seem like a costly proposition, but for others, the opportunity to access an (essentially) all-encompassing library is incredible. One major caveat to the streaming option is the fact that if you unsubscribe from the service, the music that you haven’t actually purchased will no longer be available to you.

There is a lot to think about here. No right or wrong, but a decidedly different path that should be recognized if you are interested in listening to new music in the future.