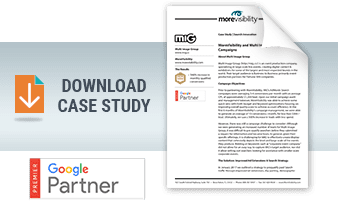 Multi Image Group (http://mig.cc/) is an event production company, specializing in large-scale live events, creating digital content & exhibitions for some of the largest and most respected brands in the world. Their target audience is Business to Business: primarily event production partners for Fortune 500 companies.

Prior to partnering with MoreVisibility, MIG’s AdWords Search campaigns were averaging 3-4 conversions per month with an average CPL of approximately $1,200/lead. Upon our initial campaign audit and management takeover, MoreVisibility was able to achieve some quick wins with both budget and keyword optimizations focusing on improving overall quality score to achieve account efficiency. In the first 6 months of MoreVisibility’s campaign management, we were able to generate an average of 15 conversions / month, for less than $300 / lead. Ultimately, we saw a 300% increase in leads with less spend.

However, there was still a campaign challenge to consider: Although we were generating an increased number of leads for Multi Image Group, it was difficult to pre-qualify searchers before they submitted a request for information and became leads. In general, given their specific offerings, it is challenging for MIG to effectively create/display content that cohesively depicts the level and large scale of the events they produce. Bidding on keywords such as “corporate event company” did not allow for an easy way to capture MIG’s target audience, nor did it allow vetting out searchers looking for assistance with smaller-scale corporate events.

From January – April 2017, MoreVisibility drove a large increase in leads at a significantly reduced CPL. Comparing 2015 to early results in 2017, MIG’s campaigns have resulted in: 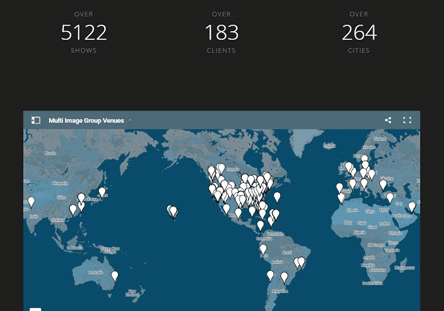